Savouring the adventure of travelling on the hitherto closed road from China into India in 2004; Samar Singh Jodha encountered a hamlet in the remote eastern reaches of Upper Assam, nestled between the Patkai rain forests and the Terap River near Ledo, which inexplicably drew him to undertake a journey of another kind. “Stunned by the natural beauty of Phaneng and mesmerized by the unique culture of its people” he could not remain a mere spectator to the plight of this diminishing community, so decided to use his “skills” to try and bring about change to “improve the chances of survival of the Tai Phakes of Phaneng.” 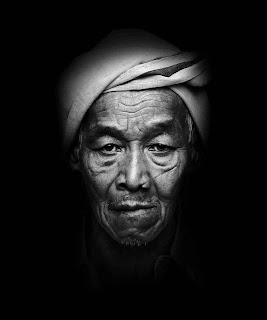 As you enter the darkened space of the ‘Religare art i gallery’, designed to evoke an atmosphere of coal and the ghostliness of a diminishing tribe; the near total lack of light perturbs but the scale of portraits is nonetheless compelling. Realistically captured on 72” x 60” canvas of photographic fine art prints, the facial details appear skilfully presented but viewing these portraits requires more than such obvious observation and the habitual city-dwellers glance, of moving hurriedly from one image to the next. It needs an engagement which is easily missed because the location, the language and culture are barely visible. Although curious about this facet, my initial reaction was that they resembled portraits of Tibetans drawn on silk which I recollect seeing on the Mall Road in Shimla in the 1970’s, so what was the point? However, the images haunted in a strange sort of way so I returned and through my conversation with Samar discovered nuances many others may have missed as well.

Today we are swamped by imagery that provokes and it’s become onerous upon the artist to grab your attention. Samar Singh Jodha desists for he is unable to make an emphatic statement. His engagement is filled with dilemmas and creates an air of simplicity which is deceptive. There are some artists whose work is meant to be looked at while some are meant to be felt and submitted to. The purity of an isolated emotion, its starkness, can be dramatic enough to evoke feeling in an objective viewer. However, when you speak of a people embroiled in the politics of coal, which you seek to help them with and return to the city where you consume the electricity that fuels the very politics you want to address, how does any honest human being even pretend to isolate the conflicting emotions? 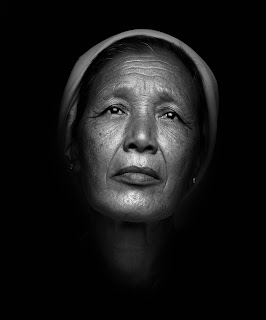 The portraits have no titles. It’s almost as if unable to find a unilateral involvement, Jodha distances himself and us, implicit with a sense of guilt and unworthiness to know them personally. Using lighting techniques, Samar Jodha deliberately eliminates all details from the frame except for the facial features which are then dramatically highlighted. He asks you thus to make your own acquaintance with them. It is complex ideas such as these which engage, drawing us into those beady eyes that speak of enduring so much that nothing matters anymore. Each experience is etched in the sinews around the penetrating lens looking out at you and the marks on the forehead that ripple like a turbulent river. He looks straight at you without challenging you to change the world. He is not afraid and there is no sense of blame. It is the forthright acceptance of knowing that the world is a complex place of conflicting interests and that peace lies in reconciling the inevitable paradoxes. He indulges the photographer; enjoys the attention but without desire or rancour. He is an enlightened soul.


A photographer of international repute, Samar’s experience in the field of visual communication includes education and apprenticeship with renowned schools and studios as well as editorial and social communication projects of acclaim; that range from fashion to advertising, a United Nations sponsored presentation on ‘Ageing in India’ and an award winning book: ‘Jaipur – The Last Destination’. His involvement in Phaneng has included an education project, a monastery, and a unique eco-tourism venture that has built local capacity as well as raised incomes. Samar’s proximity to the Tai Phake tribals, their trust in him, evolving over the years spent documenting facets of their life, led him to this project of portraiture where the eyes speak and fleshed lines convey with exquisite subtlety the complexity of his participation. 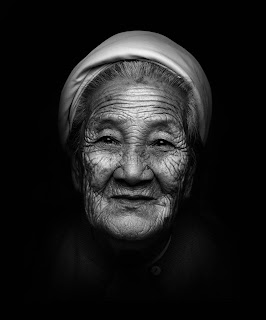 Her wrinkles are a painting in themselves. Who is she? Is she married to the enlightened one? We don’t know. Does it matter? In our chaotic lives are we likely to meet her? Perhaps not; but somewhere, somehow, we all know someone like her. The quintessential kindness of a nurturing bosom radiates from the eyes of a woman who has given birth many times; saddened by the shadow of infertility that looms because the mining of coal is polluting the water this community drinks. Can we change this reality? Will we consume less electricity to keep alive procreation in a community that is dying out? Why should Samar tell us who she is? Can we be more than the occasional, socially motivated voyeur?


By virtue of the nature of his profession, a photographer would essentially be seen as an observer, but digital technologies have facilitated the camera being more than a mere documentary witness. The world of art has expanded considerably to include much more than painting in its canvas. Today, we see manipulated photographic images that speak more as an excoriation of an artist’s inner reality, than the subtlety of putting forward visages as perceived through patient observation of the external world, which evoke the inner dimension. The distinction between artist and photographer is slowly diminishing, with photography becoming a tool for expression in much the same way as water-colour, installation or video. Images such as these portraits from Phaneng veer away from the dramatization of much that is being seen in art galleries, requiring an informed perspective to evaluate. These photographs emerge through interactions that have progressed gradually where the “gaze is mutual.” The scale of work and its positioning ensure the viewer engages with the eyes of the portrait head-on. Can you look away? Many did. 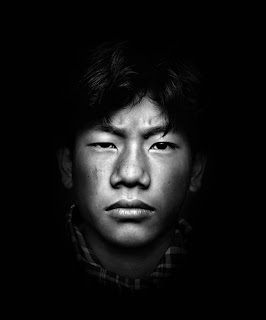 The angry youth, radiating a deep sense of dejection, the young child, astonished by the blaze of a powerful flash, all have a story to tell. If we had silence in our souls, if we could momentarily eliminate the sights and sounds of a frenetic city life, we may have heard the music of the insects at night; we would have empathy with the disillusioned knowing of their elders, the rebellious gaze of this defiant North-Eastern woman who does not challenge or provoke but simply is. Ironically the coal that is being mined in upper Assam, fuels our eccentrically electrified lives without uplifting theirs, for the locals do not work in the mines, immigrants do. So what does the photographer want us to see? What is his intent of sharing without overtly revealing?


The pace of their lives, contrasted with that which Samar Singh Jodha shares with us, is the essence of what is unfolded. In that environment his stride is different. He brings this to our notice by using the old-fashioned 4” x 5” format camera which he inconveniently lugged across unfriendly terrain, against many odds to record this silent tread that is without rush of purpose or anxiety. The format he uses is tedious, but in his mind it is reflective of the world they inhabit more so than the digital camera. The process of photographing them was in itself an experience. The format does not permit multiple frames and therefore the level of trust, the camaraderie between the community and him is expressed via such sophisticated subtleties that Jodha employs. He brings in the totality of his experience of being a part of this community, accepted by virtue of his involvement and yet never belonging. He faces complex dilemmas and guilt of his complicity with the paradoxical engagement to uplift not because he believes he can change the world, but in slowing his pace, living in their time reveals other dimensions of being that the city has robbed him of and us. 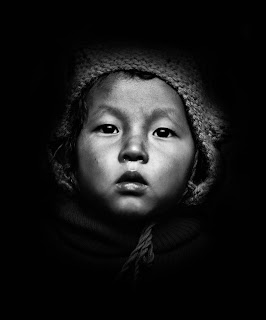 Is there a prayer that reverberates as we look into that middle-aged woman’s face? Did you notice the drawn lines that shield those lips which once readily smiled at the light? Wide eyes startled by an electric flash, lips fulsome with hope, what is the future this child inherits? Are the issues under view relevant to just a distant hamlet in upper Assam; don’t they need to belong in our world with as much engagement as Samar Singh Jodha has ventured into theirs?

In reviewing the nuances etched by the refined details of these black and white portraits one feels chided, for the photographer reminds that viewing is not about being seduced by colour, emotion and digital manipulation. He does not impose his views but prods you to question his reticence and once you touch the core, another whole world is uncovered. Its perspective of time and material so alien to ours, that in not connecting with the initial glance we almost let its beauty pass us by. Samar’s diffidence in the words that accompany the exhibition does not facilitate easy access into the sanctum of his engagement. Is this a telling comment on our viewing facility? Have we have lost the ability to assess the visual dimension which is traditionally equated with a value greater than that of a thousand words? Somehow, it seems evident that no matter how consummate the visual art, we need clarity of thought revealing the artists intent or dilemma. In our hectic over-crowded lives, a worthy vision may well be overlooked without this.

Gorgeous work! What an inspiration. Thanks for the post